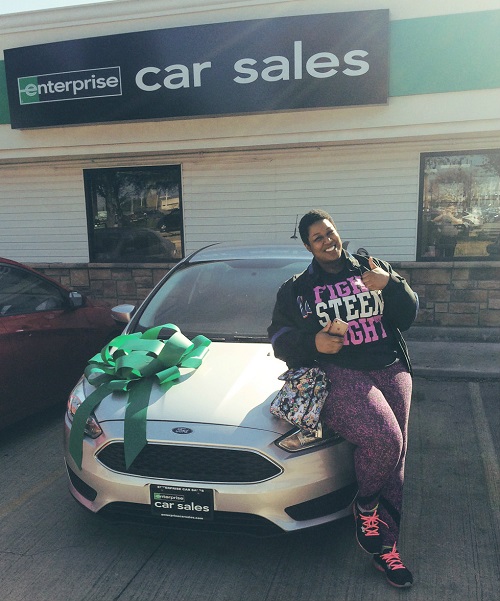 Daniella’s Story (as told by the CGS Financial Consultant):

Daniella first reached out to City Girl Savings in April of 2016 because she knew things needed to change. She scheduled a free consultation and shared that was living on her own for the first time and feared that if an emergency came up, she’d be out of luck.  She stressed that she just couldn’t seem to get the day-to-day spending under control and wanted to focus on paying down her debts/building up a savings.

Daniella completed the CGS Budget Plan and was able to see that she was spending over $600 a month on non-necessary things like dining out and shopping.  Our first plan of attack was to get the spending down to a reasonable number. Since Daniella could afford all of her bills, it was important not to cut her spending completely.

Throughout the 8 months we worked together, Daniella went through a series of positive and negative financial experiences.  Her car broke down and was not worth fixing (forcing her to now Uber everywhere), she went on a work trip and had to front the money (which wasn’t readily available), and she fought through feelings and emotions about herself and her money that she never knew she had.  On the other hand, she was able to furnish her apartment without interest and pay the large bill down before interest kicked in! She was also able to get her non-necessary spending down and made it a point to find free and cost-effective activities. Daniella also religiously paid her credit cards.

Although our work ended at the end of December 2016, Daniella kept up the practices she learned, including keeping tabs on her spending. About 2 weeks ago, Daniella went to purchase her own car (remember her previous one broke down?) and was able to get approved for a loan, thanks to her now 685 credit score! When she first met me, she wasn’t able to get approved for a Macy’s store card because her score was so low. While it certainly didn’t happen overnight, Daniella’s willingness to focus on spending her money wisely and stay motivated the best she could paid off. Way to go Daniella!

You can check out some of Daniella’s tips, experiences, and emotions when working with City Girl Savings in the Daniella’s Finance Journey articles!

Andrea Paid Her Credit Card Off