Budgeting is one of those important life skills that everyone needs but very few were taught. While I think this issue could be partially resolved by including personal finance in the education system, I don’t think that is the only way to fix the issue. In fact, budgeting is a skill that can be self-taught. I learned through a combination of personal experiences and formal training and education. 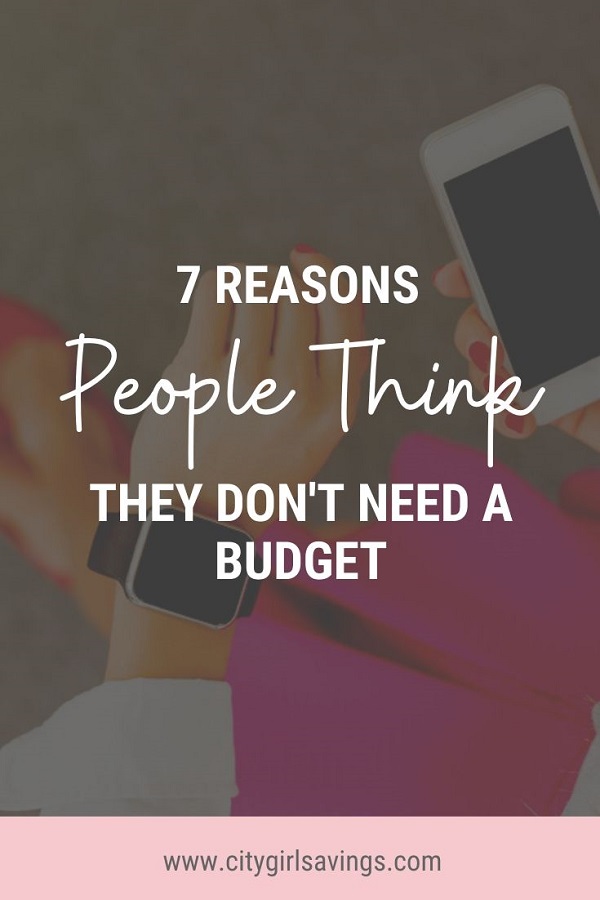 I’m one of the unicorns. Many people haven’t been able to teach themselves how to budget, nor have they been formally trained. While that may be true, the good thing is that people can always learn how to budget. People like me are helping to spread the budgeting word!

While I can only do so much, at some point people have to own up to their situation. They have to understand the importance of budgeting and actually work to learn how to do it. People must believe they need a budget to improve their situation. Unfortunately, a lot of people don’t think they need a budget, or don’t think a budget can help them. Check out 7 reasons people think they don’t need a budget. If any of these reasons apply to you, let’s work to fix that!

#1 They think they don’t make enough money to budget

Regardless of how little a person makes; a budget can always be useful! A budget can show a person how far their income really takes them – and if they should be looking for ways to bring in more money. Without a budget, a person doesn’t know how good or bad their income situation truly is.

#2 They think they know their numbers (in their head)

I hear this excuse for not budgeting all the time with potential clients. I ask “what’s your system for budgeting” and they say “it’s all in my head”. Here’s the issue with that – when your numbers are all in your head, it’s easy for one or many of those expenses to slip your mind.

We’re all busy. We all have multiple plates spinning. Why add to your mental storage space when you don’t have to?! Having a budget takes the pressure off always needing to remember your bill amounts and due dates. You get to come back to your budget and know that everything is taken care of.

#3 They think they’re too behind to budget

This can be a tough reason to overcome. Often people think they don’t need a budget because their situation is too far behind. A budget works best when you aren’t behind, but that doesn’t mean a budget can’t help you get back to even! The longer you put off budgeting, the further and further behind you will get.

A budget can help you prioritize what is behind so you can work to get back to even. A budget can also help keep your current bills in order. You wouldn’t want to fall behind on current bills because you’re focused on the past due bills. This is one of the main reasons a person actually needs a budget!

#4 They think a budget is a bad thing

There is such a negative association with the word budget…and that irks me to my core! ☹ Budgeting is such an important habit for anyone and it’s so far from a bad thing. It’s actually the most important thing a person can do or have for their finances!

If you are one of those people who think budgeting is a bad thing, I want you to challenge your negative thoughts. What really is so bad about budgeting? Here’s an example:

Negative thought: “A budget means I can’t have fun”.

Challenging thought: “A budget shows me how I can actually afford to spend on fun things so that I don’t get behind on other things.”

It’s really that simple – change how you think about budgeting. A budget just IS. It’s not a bad thing. It’s just a thing…a tool. A tool that helps you see what money is coming in, what money is going out, and what money is left over. How could that ever be bad?

#5 They think they can’t have fun on a budget

I think I did a good job of challenging this reason above! This is a popular one too – people think they don’t need a budget because they believe a budget means they can’t have fun. On the contrary, a budget shows what a person can afford to spend on fun. It’s not the budget that says they can’t have fun, it’s their income!

The harsh reality is that people want to have more fun than they can actually afford. And, if they’re budgeting properly, then their budget shows them that. Who else are they going to blame, if they aren’t going to blame themselves?! The budget!

#6 They think they aren’t ready to budget

I will say that out of all the reasons people think they don’t need a budget; this is probably the most valid of them all (though still not going to fly in my books)! Budgeting does force you to take a good look at your finances. That can be a very scary process.

The process can be so scary that people never get started. That only leads to a life full of financial worry and anxiety. It doesn’t have to be hard to start budgeting. You can work with a finance coach, start with an app or program, begin with an accountability partner, or take it slow. Don’t make it harder than it needs to be to get started.

#7 They think a budget takes too much work

The final reason people think they don’t need a budget is because a budget can take too much work. Isn’t anything worth having, worth working for? If you want a life of financial freedom, don’t you think it’s worth putting in the work to get there? If you answer no, then financial freedom isn’t that important to you. If you answer yes, then budgeting isn’t too much work.

While budgeting isn’t a one-and-done activity…I’ll admit that it is life-long. It doesn’t have to be a lot of work though. You can set up systems and routines around budgeting that make it easy to get it done. I do a money review at the end of each month, and I allocate 5-10 minutes a day to track my spending and review my accounts.

I’ve been doing this for years and it’s so ingrained in my daily routine that it doesn’t feel like extra work. In fact, it feels like I’m in tune with my money – which is a great feeling! It’s certainly worth the minimal amount of work it requires to stay focused and consistent with it.

What Makes a Budget Successful?

Now that you know common reasons people think they don’t need a budget and the counter arguments to those reasons, let’s talk about what makes a budget successful. The three items listed below are the most important things to keep in mind when creating a successful budget for your situation.

#1 Including all spending and expenses

To make your budget successful, you’ll want to make sure all spending and expenses are included. This means any variable, one-off, non-recurring and inconsistent expenses. Forgetting about these types of spending areas can result in multiple budget adjustments as they come up. That will make more work for yourself than it needs to.

I never leave fun out of my clients’ budget plans. Life is too short to be too rigid with your money. On the other hand, you don’t want to go overboard with what you spend on fun. Give yourself a realistic and moderated amount to spend on fun each month. Factor it into your budget so you don’t feel bad when the time comes to spend it!

Convinced you need a budget now? Schedule a free consultation with me and we can discuss next steps for getting you set up on a proper budget plan!

Related: How to Enjoy Budgeting Your Money

Budgeting is a critical part of anyone’s financial success journey. It’s going to be a lot harder to reach your goals without a solid budget plan! Have you used any of the excuses above for not creating a budget? Why do you think the reasons above have stopped you from budgeting? Post a comment below to share your thoughts!