How’d She Do It? Karen Civil

How’d She Do It? Karen Civil

If the name Karen Civil doesn’t ring any bells, we’ll tell you now that it’s one name you won’t want to forget! Known for working with A-List celebs such as Dr. Dre, Lil Wayne, Wale and many more, Karen Civil’s work in social media and public relations is strategically focused towards hip-hop artists. This has made her a force to be reckoned with.

Karen grew up in a Haitian-American family in New Jersey. She began her career when she worked on a project for a competition in middle school developing fan sites for The Backstreet boys and actor J.D. Williams. Although she didn’t win first place, that did not stop her from pursuing her passion for music. Soon after the competition had ended, the lawyer for J.D. Williams sought her out to help on another project.

Shortly after finishing high school, Karen began working as a staff assistant for the well-known radio station Hot 97. At the radio station, Karen worked with DJ Funkmaster Flex, and that eventually opened doors for her to start working with rap group Dipset, specifically developing e-commerce for the group. With her eyes still on the prize, Karen moved to Asylum Records, and in 2008 started her own website and marketing agency.

Although Karen seemed to be a jack-of-all-trades, her main focus was on digital strategy in the hip-hop industry. Karen is most known for her work with rapper Lil Wayne, when she gained media attention for helping to create and run Weezythanxyou.com. It was a website where the artist published letters to his fans while he was incarcerated. She eventually joined Dr. Dre’s team by becoming the music and entertainment manager for Beats by Dre.

Karen added public speaking to her resume when she began hosting empowerment conferences and panel events. She even started hosting events for media outlets like BET. In 2015, she released self-help book Be You & Live Civil: Tools for Unlocking Your Potential & Living Your Purpose. In the following year, she became hands on in the music world by producing a song with Wale and Lil Wayne. Karen was recently interviewed by Forbes and continues to make her mark with the hip-hop and public relations world!

If you have a dream, never give up on it. Staying true to you and your talents will open the right doors. Karen stayed persistent, and where there was a way she made it work. Have you heard of Karen Civil before? Are you a fan of her story? Share your thoughts about Karen by leaving a comment below! 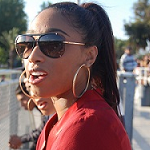 Charismatic, Confident, and Cool are only a few words that can sum Taelor Cage up. Known for her awe-inspiring personality and creative outlook on life this young lady is a force to be reckoned with. Taelor earned her degree in journalism with emphasis in Broadcast from California State University Northridge. She currently works at Viacom Media Networks in Los Angeles. Taelor started her journalism career as a columnist writing for an online men's fashion and entertainment blog. It didn't take long before her due diligence opened doors of opportunity at CGS.